There is much to discover in Germany's 13 winegrowing regions – breathtaking landscapes, history, wine culture, hospitality and enjoyment. If you are seeking an active holiday, then you can try waterskiing or kite-flying on the Mosel, kayaking down the River Main, free climbing in Württemberg or exploring the wine region on a motor scooter in the Pfalz.

If you are after relaxation, you are sure to find what you are looking for amongst the numerous wine, food and wellness offers. Wine routes take visitors to the most beautiful highlights whether hiking, cycling or driving. 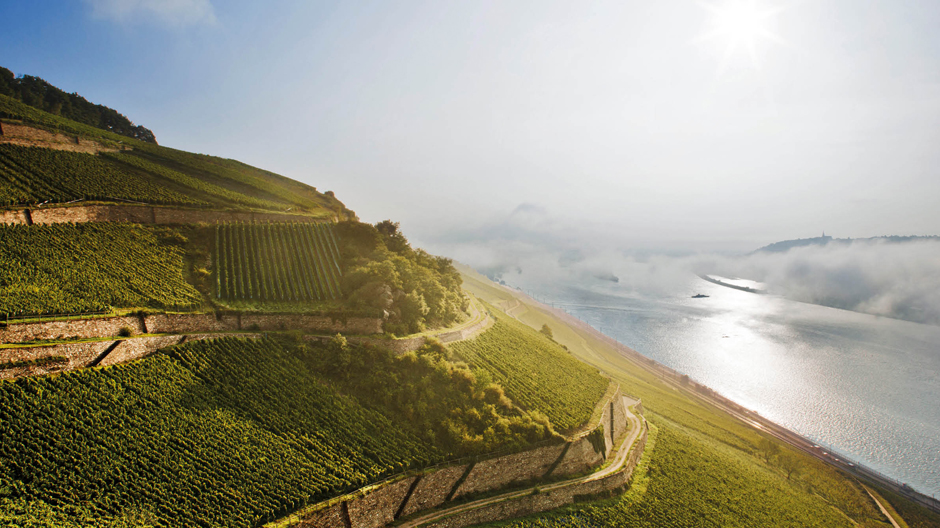 With 563 hectares of vineyards, the Ahr is one of the smallest winegrowing regions in Germany. Red wines in particular thrive on the steep slopes above the river. It is not only lovers of excellent red wines that make pilgrimages to the red wine paradise of Germany. The Romans had already appreciated the climatic advantages of the wild and romantic Ahr Valley and planted the first vines. Fortunately, the vineyards in the slopes and the hiking trail were not damaged by the flooding in summer 2021.

The Baden wine region, the southernmost and third largest in Germany, is primarily a long, slim strip of vineyards nestled between the hills of the Black Forest and the Rhine River, extending some 400km from north to south. Baden is the most important German region for Pinot Noir and proud of its white pinot varieties.

Franconian wine has been grown along the Main River for over 1,200 years. Not only the Bocksbeutel – a flat, round-bellied bottle – but also climate and drier-style wines set Franken apart. Above all, the region is known for powerful, earthy Silvaner wines. Spätburgunder (Pinot Noir) and Domina, seldom seen elsewhere, are the main red grapes.

The Mittelrhein is the spectacular stretch of the Rhine River between Bonn and Bingen, known as the Rhine Gorge. The southern part was declared a UNESCO world heritage site in 2002. Here, the river has carved its course through the slate stone hills to form a steep, narrow valley with a microclimate in which vines have thrived for 2,000 years.

The valleys of the Mosel River and its tributaries, the Saar and the Ruwer, have been the setting for some of Germany’s most romantic wine country since Roman times. The dominating Riesling grapes thrives especially well on the slate soil.

Nestled between the Mosel and Rhine valleys, the Nahe is named after the river that traverses the forested Hunsrück Hills as it gently flows toward Bingen on the Rhine. Striking rock formations, mineral deposits and gemstones attest to the remarkable geological diversity that also accounts for the Nahe’s broad spectrum of wines.

For 85km (53 miles) the Deutsche Weinstrasse (German Wine Road) winds its way through the picturesque villages and lush vineyards between the borders of Rheinhessen and France. Vines thrive in the warm, sunny climate of the Pfalz, yielding elegant, full-bodied wines, complemented by regional cuisine.

The Rheingau is a very popular tourist region in which old monasteries and castles are magnificently embedded in the wine landscape. The Rheingau Riesling Route leads through picturesque wine villages over 120km. There, noble Riesling and Spätburgunder (Pinot Noir) vines carpet the slopes of the Taunus Hills.

Germany's largest wine region, Rheinhessen, lies in a valley known as the “land of a thousand hills”. Varied soils and the favourable climate make it possible to grow many grape varieties. Rheinhessen is today considered a very dynamic region because the next generation is now taking over responsibility.

The vineyards of the northernmost German wine region are about equidistant between Weimar and Leipzig. For ten centuries, vines have been grown on the steep, terraced, limestone slopes of the Saale and Unstrut river valleys. Traditionally dry wines with typical, finely nuanced fruitiness and liveliness are the hallmarks of the area.

One of the smallest and easternmost wine region lies in the Elbe River Valley. Dresden, nicknamed the “Florence of the Elbe” because of its cultural ambience and mild climate, and Meissen are the main towns. Vines are planted mostly on steep, terraced slopes of granite. The 90km Sachsen Wine Hiking Trail also connects the many pearls of the area, leading to the most beautiful vineyards, viewpoints and wine cellars.

Württemberg is a rural, hilly region adjacent to Baden and south of Franken. Metropolitan Stuttgart and Heilbronn are wine centres, but most of the vineyards are scattered amidst fields and forests throughout the Neckar River Valley. Red wine predominates and ranges from crisp, light Trollinger to Schwarzriesling (Pinot Meunier) and complex Lemberger (Blaufränkisch).

What began in 1097 at Schloss Vollrads in the Rheingau has continued to this day in viticulture, cultural history and hospitality. Today, Schloss Vollrads is a modern winery, which is also one of the oldest and, at the same time, one of the most beautiful. The combination of historic roots and a contemporary, humane approach make Schloss Vollrads a special place and its Riesling an extraordinary taste experience.

Eberbach Monastery is located in a scenic side valley of the Rheingau, away from the noisy traffic routes and hectic settlements – framed only by forest and vines.

The cultural traditions and also those of viticulture, which the monks cultivated, are carefully guarded by the Eberbach Monastery Foundation as a historical heritage and brought closer to a large number of people through a variety of cultural events.

The monastery complex is open to experiences with all the senses. The simple beauty of the monumental Romanesque monastery church impresses the visitors and during a strolling wine tasting – one of the many themed tours that are offered – you can enjoy the excellent wines of the Hessian state wineries. Another pleasure are the wonderful concerts that the Rheingau Music Festival organises here every year. Experience the historic cabinet cellar and follow the traces of the film "The Name of the Rose", which was filmed here, in the monks' dormitory.

The Benedictine monastery founded in 1100 and Johannisberg Castle, built in 1715, is one of the oldest Riesling wineries in the world. After all, wine has been grown on the “Johannisberg” since 817. The world-famous “Schloss Johannisberger Riesling” has been thriving here since 1720. In 1775 they discovered by chance – the courier came too late with the permission to start the grape harvest – the higher quality of a "late" harvest and developed from this the high quality levels such as Auslese, Beerenauslese or Trockenbeerenauslese.

In the Mittelrhein, for example – where ancient castle ruins tower over vine-covered cliffs and medieval villages – there are two signposted hiking trails on either side of the Rhine: the Rheinsteig (www.rheinsteig.de) and the Rheinburgenweg (www.rheinburgenweg.com). Besides hiking, the unique landscape scenery of the Mitteilrheintal can also be discovered on a boat cruise.

In the air: High-flyers have plenty of options in Germany’s winegrowing regions. Those craving thrills can book a tandem paragliding flight in Bad Ems on the Lahn, in the Mittelrhein region. A gentler ride is available through the many hot-air balloon tours that can be seen floating in fair weather above the gently undulating vineyards of places like Rheinhessen, the Südpfalz, Baden and Hessische Bergstraße.

Golf: For those who never travel without their clubs, the Pfalz is an ideal destination. The Deutsche Weinstraße golf course situated in the middle of vineyards near Dackenheim even has holes named after grape varieties.

Watersports: Those who prefer boats to bikes will love the 217km “Wasserwanderroute Mosel” (Water Exploration Trail), with boat rental stations and more than 60 berths to take a break on shore as needed. Waterskiing on the Mosel is even possible at Bullay, wetsuit included. The Saale and Unstrut Rivers are known for their beautiful navigable waters, while the Glan, a Nahe tributary, and the Lahn are suitable for canoeing and kayaking.

Cycling: The banks of the rivers in all wine regions are ideal for exploration by bicycle. Active cyclists can get to know the romantic winegrowing areas along the Main River by pedalling the 600+km of cycle paths from its source to the mouth. The Mosel is another noted cyclists’ paradise, with more than 1,000km of dedicated bike paths, including the option to have luggage transported separately. The wine roads through the idyllic Tauber, Jagst, Kocher and Rems Valleys in Württemberg and the Bocksbeutelstraße in Franken also offer plenty of variety for the eye and the calves all year round.

The valleys of the Mosel River and its tributaries, the Saar and the Ruwer, have been the setting for some of Germany’s most romantic wine country since Roman times. Vines and forests carpet the steep slate slopes framing the river as it loops its way toward the Rhine at Koblenz. It is a Riesling region par excellence. These are wines of incomparable finesse, rich in fragrance and fruity acidity and often, a mineral undertone.

Besides many signposted routes like Moselhöhenweg and Römische Weinstraße, you should not miss Bremmer Calmont – a “hot mountain” with mineral slate soil for delicate wines with dignified fruit flavours. With a height of 380.6m and with gradients of up to 65º, the Bremmer Calmont is one of the steepest vineyards in the world.

More than 400 years old, the grapevines from the "Rhodter Rosengarten" have not only survived the centuries but still bear fruit every year. The vineyard in the wine community of Rhodt unter Rietberg is said to have existed already before the 30-Years-War, and that took place between 1618 and 1648. It is still stocked with its original grapevines – most of them Traminer grapes.

No vineyard on Planet Wine is more extreme than the Bastei, the narrow strip of vines clinging to the foot of the more than 200m-high Rotenfels, German for red cliffs.

The Rotenfels is particularly impressive when the rock face glows red in the setting sun. This gigantic mass of volcanic rhyolite is the highest inland cliff between the Alps and Scandinavia.

7. Why you should not miss trying Winzersekt

Germans consume more sparkling wine than any other nation. They also produce excellent sparkling wines, known as Sekt. If the traditional bottle fermentation method is used, they are called Winzersekt. Located in northern Europe, the wine regions are suited for the production of fresh, fruity Sekt. In terms of the price/quality ratio, this is a real insider tip.

During the last two decades, young winemakers have given German wine a new image by turning it into a lifestyle drink for consumers of the same age. In the meantime, "Generation Riesling" is the largest of world's young winemakers’ associations with currently around 500 members. Right from the start, the name of the initiative placed Riesling in the foreground as the leading German grape variety. Today, however, it is also turning the spotlight on other local grape varieties.

Universally regarded as cool climate varietals, Riesling and Pinot Noir are virtually predestined to thrive in Germany, where climatic conditions at this northerly latitude differ considerably from those in Mediterranean winegrowing areas or in the southern hemisphere.

Riesling is the calling card of German viticulture and THE varietal that shapes Germany’s wine image worldwide. German Rieslings thrive in various soil types, which helps account for the fascinating diversity they offer in terms of bouquet and flavour. One can justifiably say that Germany is the “home of Riesling” – after all, about 40% of the world’s Riesling vineyards are located here.

Like Riesling, Pinot Noir can reflect the terroir precisely and the multiplicity from chalky and limestone soils, over red breccias up to volcanic and slate soil increases the variety of style expression. Another quality-improving effect, out of the hands of growers, is climate change, resulting in a more reliable and better ripening of Spätburgunder.

With 310 Michelin-star restaurants, Germany is a premium address for gourmets. With a young generation of chefs, a refined regional cuisine has developed.